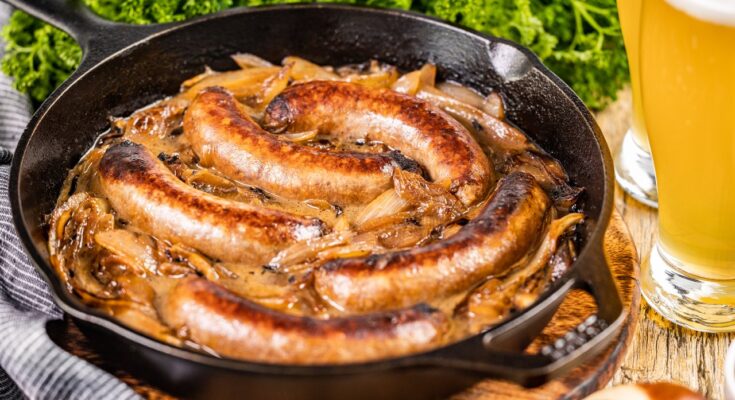 If you’re looking for the ultimate brats recipe, you’ve found it! This beer braised bratwurst recipe makes a great addition to a fun barbecue. You could also whip them up for a quick and easy weeknight dinner. This hearty dish knocks traditional burgers and hot dogs out of the park! To bring out the flavor in the sausages, we brown them first. We do this to hold onto all of those delicious aromas that get released from the meat as it cooks. You can also serve them straight from the hot and juicy beer bath. They’re much tastier than shriveled-up sausages that have been hanging out on the grill to dry up. The toasted bun for serving takes this dish up a notch. Smear them with stone ground mustard, and place the bratwurst on top with some of the tender onions. It’s a flavor party that you’re all invited to!

What Kind of Beer is Best For Bratwurst?

There are several different types of beer out there and not all are ideal for this beer brats recipe. Go with a pilsner for best results. That means brands like:

You may have a thing for craft varieties, but save those for drinking!

We realize that not everyone feels comfortable cooking with something that contains alcohol. You can sub in for:

That said, we love the earthiness that cooking with beer brings to this dish. And, keep in mind, when you cook with it all of the alcohol evaporates out.

As you gather the ingredients for this dish, the type of meat you choose is important. Bratwurst is a type of sausage. You may have already seen pre-cooked options that have already gone through the beer braising process in the supermarket. Skip those — you want to go for unprepared bratwurst. The best will come straight from a butcher!

What is the Best Way to Cook Beer Brats?

We swear by our brown first method! If you’ve ever worked with a beer brats recipe before, you know that it usually calls for you to create a bath by boiling beer and onions together. Recipes like this typically skip the browning step altogether. When you make ours, don’t skip it! You’ll be able to hold onto the flavors in the meat better this way. And you won’t end up with mushy and flavorless sausages.

Can I Make This Recipe on the Grill?

Preheat your grill, place brats on grate, and brown on both sides. While the brats are browning, in a grill safe skillet or dutch oven, melt butter and cook onions. Add in salt and pepper. When they become softened and more golden, add in garlic. Let cook for about 1 minute then add in beer. Simmer and then add in brats and let cook for 10 minutes in the beer and onions or until ready to serve.

Troubleshooting: How Do I Keep My Brats From Drying Out?

If you follow our recipe, you won’t have to worry about the meat drying out. Because we brown them and then cook them in the beer and onion mixture just before serving, they come out juicy every single time!

Wondering what would go well with your bratwurst recipe? Here are some of our favorite serving suggestions: 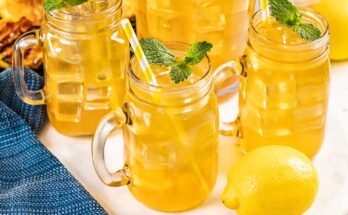 How to Make Grilled Lemonade 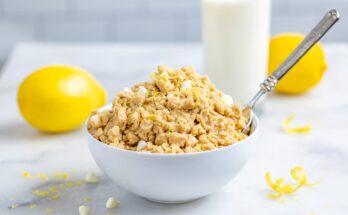 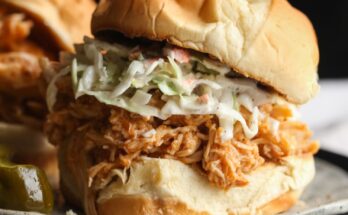